This news was released by Medical News Today on 30 March 2011.

New research is being carried out at Keele university to examine links between aluminium and Alzheimer’s disease.

A study by scientists at Keele that was published in 2006 showed that aluminium could be removed from the body of individuals with Alzheimer’s disease by asking them to drink a silicon-rich mineral water.

A new study is an extension of this, in which patient and carer are both drinking silicon-rich mineral water over a period of 13 weeks, during which their urinary excretion of aluminium, silicon and iron is monitored. The scientists are now looking to recruit individuals into the study over the next few weeks.

Dr Christopher Exley, Reader in Bioinorganic Chemistry at Keele, said: “The primary objective is to confirm that regular drinking of a silicon-rich mineral water will help to remove aluminium from the body. Essentially the idea in the longer term is that if aluminium contributes to Alzheimer’s disease, then removing it from the body could help people with Alzheimer’s disease.”

In the current study they are also monitoring the cognitive ability of patient and carer during the 13 week study period to see if either might benefit from drinking the silicon-rich mineral water.

Dr Exley added that it was important to stress that while dementia is a priority area for the present government, there are no effective treatments for Alzheimer’s disease, even after 40 years of research. The Keele team is trying to test the hypothesis that aluminium might contribute towards Alzheimer’s disease and if this is true then Alzheimer’s disease patients will benefit from the simple task of drinking silicon-rich mineral water every day! 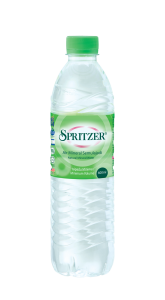 We do not need to wait for the results of this new study. Prevention is better than cure, so goes the saying. So why not make the best move by choosing the right water for your hydration needs and yet benefitting against the aluminium hazards that we are facing in our environment and diet.

Experts advised us to consume about 2 litres of water per day to maintain our well being, So what is the best water for our drinking needs? I recommend SPRITZER NATURAL MINERAL WATER for its rich content of Silicon (OSA).
Both the University of London and Keele University from United Kingdom (UK) have tested Spritzer to contain rich amount of Silicon (OSA) of around 30 – 35 mg/litre.

Further more, Spritzer’s OSA has so many other benefits such as for bones, hair, skin, blood vessels that it should be part of your daily diet anyway. The best of all, you are only paying a small price for so many benefits. Do you know in USA and Europe, Bioactive Silicon (OSA) are sold as supplements and are charging very expensive prices.

So be a wise consumer, choose SPRITZER NATURAL MINERAL WATER.