SMOKERS have a 45% higher risk of developing dementia than non-smokers, according to information published recently by the World Health Organization (WHO) in collaboration with Alzheimer’s Disease International (ADI).

It is estimated that 14% of Alzheimer’s disease cases world-wide are potentially attributable to smoking. WHO warns that exposure to second-hand smoke (passive smoking) may also increase the risk of dementia.

“Since there is currently no cure for dementia, public health interventions need to focus on prevention by changing modifiable risk factors like smoking.” says Dr Shekhar Saxena, director of the Department for Mental Health and Substance Abuse at WHO.

“This research shows that a decrease in smoking now is likely to result in substantial decrease in burden of dementia in the years to come.”

“Tobacco is one of the biggest public health threats the has ever faced, killing nearly six million people a year.” Says Dr Douglas Bettcher, director of the Department for Prevention of Noncommunicable Diseases at WHO.

“WHO urges governments to actively implement and enforce the measures of the WHO Framework Convention on Tobacco Control, especially smoke-free environment laws and access to tobacco cessation services.”

“It is no surprise to see these findings confirm that tobacco smoking is a major risk factor for dementia. This adds yet another item to the long list of the devastating consequences of tobacco and gives even more reason for personal and public health action to help people to quit smoking.”

“The research also shows that quitting smoking later in life might be beneficial, so encouraging and supporting current tobacco users to quit should be a priority.” Says Serge Gauthier, chair of the ADI’s Medical Scientific Advisory Committee.

Dementia affects more than 44 million people worldwide, with almost two thirds of them living in low- and meddle-income countries.

Every year, there are 7.7 million new cases of dementia. In 2010, the global cost was calculated at US$604bil (RM1.93bil), which represents 1% of global GDP (gross domestic product).” Says Marc Wortmann, ADI Executive Director. “No government can ignore the opportunity to links this new information into its planning and health system activities to reduce smoking and control NCDs.”

ADI believes that this information brief can form the basis countries to add messages about brain health and dementia risk into public health anti-smoking programmes and interventions. – HealthNewsDigest.com

Cigarette smoke is full of the neurotoxin, Aluminium. See Below: 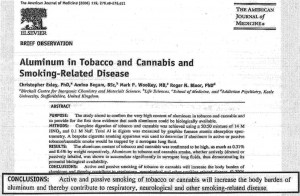 So it is no surprise that the World Health Organisation(WHO) is now confirming that smoking increases risk of dementia such as Alzheimer’s disease. Smoking in fact is the fastest way for Aluminium to get to your brain as the olefactory(nose) has direct access to the brain without needing to go through the blood-brain-barrier. Hence regular exposure to cigarette smoke whether as smoker or second-hand smoke can be very detrimental to your brain health as well as other ailments such as risk of lung cancer. Therefore it is very important to avoid cigarette smoke. But sometimes this may not be possible. We are living today in what experts called “ The Aluminium Age” where Aluminium is ubiquitous or omnipresent. Below are sources where we can find Aluminium: 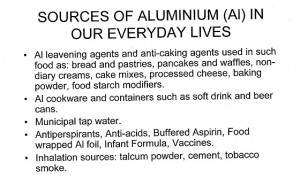 One of the best and inexpensive way to remove Aluminium from the body is to drink daily SPRITZER-a Silicon Rich Natural Mineral Water. Research by Professor Chris Exley an expert in Aluminium, and published in Journal of Alzheimer’s Disease (2013) (Click here & here to view) has shown that regular daily drinking of one litre of SPRITZER Natural Mineral Water removes Aluminium from the bodies of people with Alzheimer’s disease and in some individuals offered clinically- significant protection against cognitive decline. The research concluded that long term drinking of Silicon rich natural mineral water such as SPRITZER, can reduce an individual’s everyday exposure to Aluminium and lower their body burden of this unwanted neurotoxin.
SPRITZER has been tested by two prestigious UK universities viz University of London and Keele University to contain therapeutic amounts of natural Silicon a very powerful trace element in removing or chelating Aluminium from the body. Silicon has also been shown to synthesise(make) natural collagen in the body and hence is good for connective or collagenous tissues such as bones, skin,hair,nails and blood vessels (Click here to view).

So be a wise consumer. Drink SPRITZER Natural Mineral Water daily for your hydration needs and get the benefits of OSA.